It's OK to feel lost every once in awhile

So I’m having a hard time right now processing something.

I’m not so naive to think that putting myself and my struggles out there for everyone to see was going to lead me to ONLY positive and supportive comments. It’ll be a week tomorrow since I started this blog and I have to say the level of support and understanding has been overwhelming! You know who you are and I’m so thankful for all your advice, encouragement, and understanding as I put myself out there. To be analyzed and judged. There is a specific reason why we do this! WE NEED PEOPLE TO HEAR US! To hear our struggles. To LISTEN. To understand and therefore be educated.

I had what looks like a sad troll comment on my more popular post The Forbidden Forest: How My Mania Helped Me Cheat on My Husband. He goes by the name positivebalo. If you scroll down to the bottom of the page, you’ll see his snarky remark. It looks like a joke. The weird thing is that he liked the post but thought it was funny. FUNNY! Yes you heard me.

Now, I don’t expect everyone to get it. I was expecting a lot of “you SHOULD be ashamed” and “well it was YOUR fault. You were weak.” But for Christ’s sake! Laughter?!?! I tried responding to him but haven’t heard anything back. I put it up on Twitter for debate.

Let me make one thing absolutely clear: IT”S NOT A FUCKING JOKE! I don’t know how many of you read it thinking I was just writing an erotic sex piece to get my name out there. To drive traffic to my blog. Sex sells but that wasn’t the point. Last week before I started this, I was drowning in my own shame and guilt. What I did was wrong. It was stupid. My Mania HELPED me do those things, but I did them. I made myself vulnerable to the internet and what I wanted was someone to relate to. Someone who had/has the same struggles. I don’t care about popularity or hits. I want to have my voice heard and get some advice. I want to raise awareness and let people know what’s up. I’m sorry a lot of you don’t get it. Like I said, I’m a scientist not a writer. Bear with me if my message gets lost in translation.

That vent felt good but I’m not about to dedicate and entire blog post to this kid from Singapore. He isn’t related at all to my next topic.

For the past few days, I’ve been watching the Fog roll in. I mentioned that I’m trapped in the Fog and my compass is pointing me in the direction I’m supposed to go but I can’t find the path. Well I’m falling into depression. I can see it. And it’s clouding my vision. It’s muddling my drive and determination.

So I want to draw you guys a map of my emotions. My brain and where I’m at.

I just left the Forbidden Forest. I look back with a sigh and proceed onward. I found the Trail of Stability (self-explanatory) and I felt happy. I was Stable. But I’ve come to notice my stability doesn’t last long. Bipolar Disorder 2 doesn’t cooperate well with me and I don’t get a lot of time off from it. As I make my way along, I look back and I see it. The Fog. It creeps up on me slowly; biding it’s time. It’s intelligent and cunning. Vile and cruel. It know I can’t outrun it. Unlike the Forbidden Forest which a place that looks good on the outside but can generally be avoided, the Fog permeates my entire world and is the driving force that makes me depressed.

Hopefully that all makes sense. I guess it doesn’t really. I’m trying to name these things so my stories are easier to follow but I’m doing it as I go so I can understand it’s hard to follow. I like classification systems so maybe drawing it out will help:

Hopefully this chart makes things more clear. Now, the Firth is something I haven’t discussed yet but I’m headed straight towards it right now. It refers to large coastal waters in Scotland and England. It’s essentially a large sea bay. You can see a visual in the picture below in the middle near the term “Firth of Lorne”: 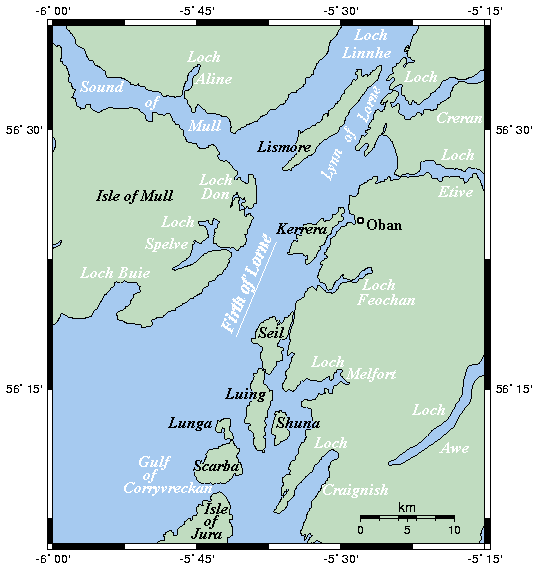 Basically, whenever I get depressed, the Fog leads me away from the Trail of Stability to the Firth. There, on the edge of the shoreline is a dock. Anchored to the dock is a small boat. The Fog tricks me into getting into the boat and sends me out to sea. The farther out I go, the deeper the Depression. However, the difference between the Fog and the Fire, is the level of resistance. The Fire is hot, heavy, and seductive but I can sense the danger. It’s not overpowering initially like the Fog. I find myself much more susceptible to Depression than Mania. In fact, people who suffer from Bipolar Disorder 2 usually spend more time in Depression than Mania (for the most part). This is definitely true for me.

Once I hit the middle of the Firth, that’s when I can’t see the shoreline anymore. I’m lost at sea. While my compass may or may not be working during this time, it doesn’t really matter. I can hear the faint voices of the people on the shoreline pleading for me to return but I don’t have the energy. The waters are still and silent and the row back is too far. It takes so long to navigate back to shore. That’s when suicide rears its ugly head. It makes me want to punch a hole in the boat and let myself drown. And I can’t swim. The Fog tells me to just let it happen. It’s all-encompassing at this point. I’ve thought about letting myself drown. I’ve even planned it out. Obviously, I didn’t but it’s telling me right now to give up and stop blogging. That no one is going to read this and no one is going to care.

The thing to remember about all this is that even though I’m mapping this world out as I go, I’m not sure if I’m going in circles or not. Meaning that I’m not sure if the Firth is even the same one as the last time I was depressed. I had no idea I had the Forbidden Forest in my mind until I stumbled upon it. There may even be an Island of Psychosis for all I know. I’ve never seen it. There is a whole world inside and it’s much larger and more terrifying than I imagined. This must be akin to what the pilgrims felt like when they first landed in The New World. You’re told a lot about these territories in books, articles, and stories but you have no idea if it’s the same landscape for you…or how large and scary they actually are.

People who have Bipolar Disorder hopefully can relate to this map of my mind. For those of you who don’t have this mental illness, I hope this paints a clearer picture of what a scary unknown place the mind of a manic-depressive looks like.

Unfortunately, I have to end this post for now.

I can barely make out the figure of a boat off in the distance.

5 thoughts on “Where Do I Go Now?: Mapping The World Of My Mind”

Stuff I Wrote About